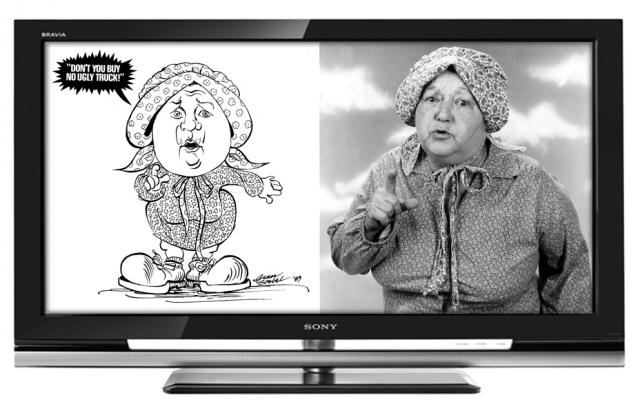 The year was 1987. One man hit the road with a briefcase, a box of videotapes, and a campaign that would dominate tier 3 advertising for nearly a decade.

This man was Strong Associate Russ Randolph. He was commissioned as the exclusive salesman for the Don’t You Buy No Ugly Truck advertising campaign, the brainchild of Mike Strong and Tommy Charles. For years, Randolph traveled the country selling one of the most successful commercial packages in recent history.

To learn what sparked this abhorrence for unattractive trucks, we have to start with the popular fast food ad: Where’s the Beef? Inspired by the familiar, grandmotherly appeal of the Wendy’s commercial, Mike sought to capitalize on this trend and create the Ugly Truck television spot series. 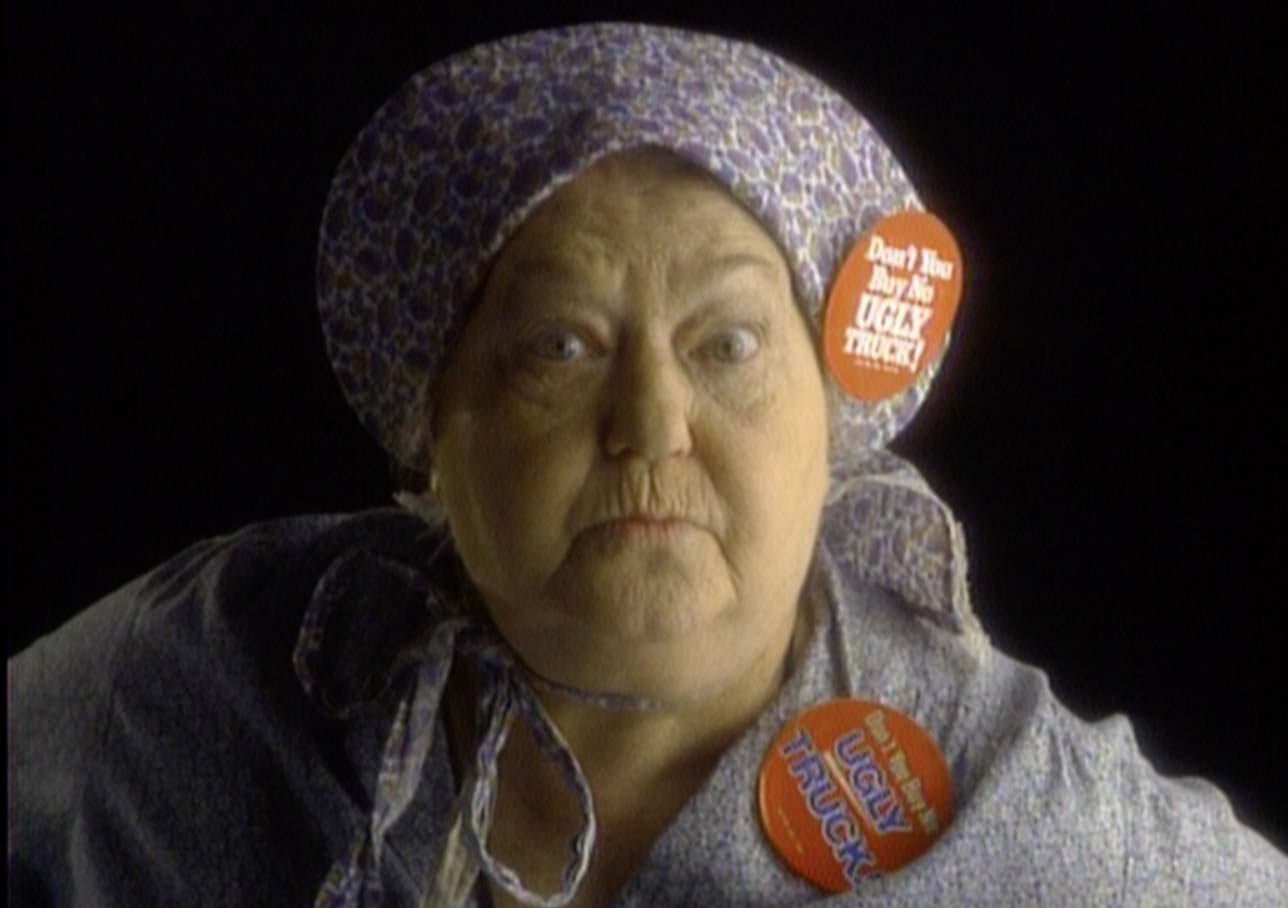 In the beginning, “Don’t You Buy No Ugly Truck” was only a slogan, launched primarily in the Birmingham market. Shortly after it was introduced, the phrase’s success made it clear that a spokesperson delivery would up the ante.

The first Ugly Truck casting call took place at Roebuck Mazda. The open-to-the-public event was a huge success, generating an unanticipated turnout and drawing hundreds of people into the Mazda dealership. While the client certainly profited from the additional brand exposure, it was Strong who scored biggest with the discovery of Granny.

Once Granny was embedded in the ads, the campaign’s popularity exploded. All across the nation, people who were alive in the 80s will remember the iconic, lightheartedly patronizing figure warning them against the perils of purchasing an unsightly truck.

By the turn of the century, Granny had all but disappeared. It wasn’t until 2017 that John Paul Strong began looking into reacquiring the rights to the campaign and reincarnating it into its present-day form.

John Paul had the perfect talent in mind for the role. Instead of the bonnet-clad, Andy Griffith-style Granny of the past, the new Ugly Truck crusader would bear a closer resemblance to the campy style of Larry the Cable Guy. A local favorite of John Paul’s lake community, Smack was commissioned to play the part.

It would have been easy to recreate the Ugly Truck campaign without veering much from its original style. The Strong team realized, however, that past success doesn’t guarantee the same results for a remake. Ugly Truck worked well in its time, but today’s digital-savvy audience has come to expect something more interactive than the original approach.

Several months of planning went by, and Strong’s creative team had finally developed the master plan for Ugly Truck’s 2018 launch.

“We had to make sure we had the right guy with the right look and the right lines,” Creative Director Tori Reid said. “We didn’t want to rush into it just because this formula had worked before. It was important to create something that the Account Team can sell.” 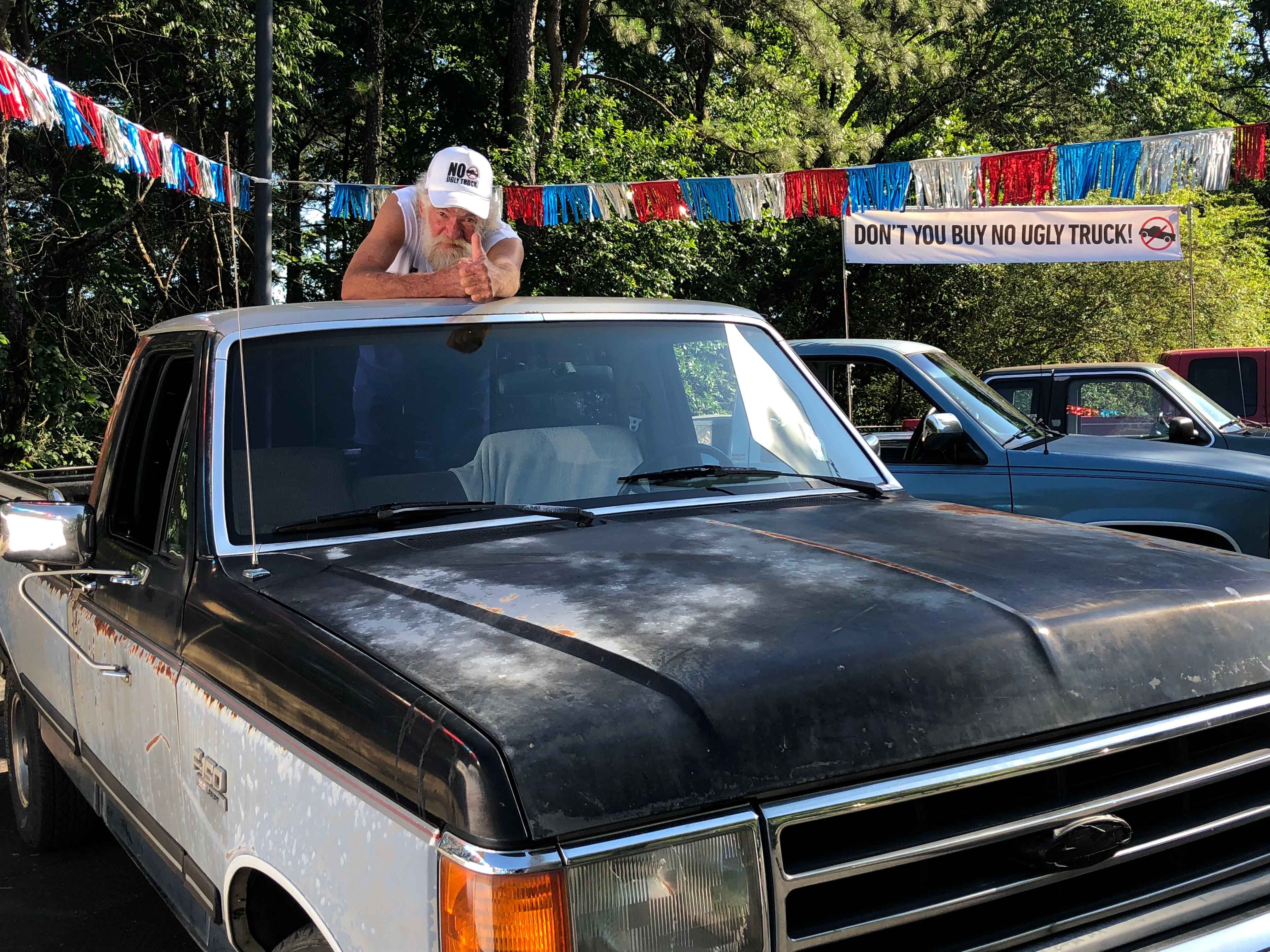 What It Means for Our Clients

The marketability of such a classic should not be underestimated. Any car dealer who was in business in the 80s will remember the original Ugly Truck and be able to associate the new campaign with its original success and ubiquitousness. In the beginning, this package will be targeted primarily at small- to mid-size dealers across the country. It includes a TV spot, homepage graphics, Facebook graphics, POP and a hangable lot banner.

“This campaign will give us a great opportunity to sell one-offs to dealers who aren’t currently in our client base, opening up our market reach and getting our name in front of new audiences,” Reid said.

Promotion and sales of Don’t You Buy No Ugly Truck will begin as early as July. Keep an eye out for the return of this timelessly successful advertising campaign. 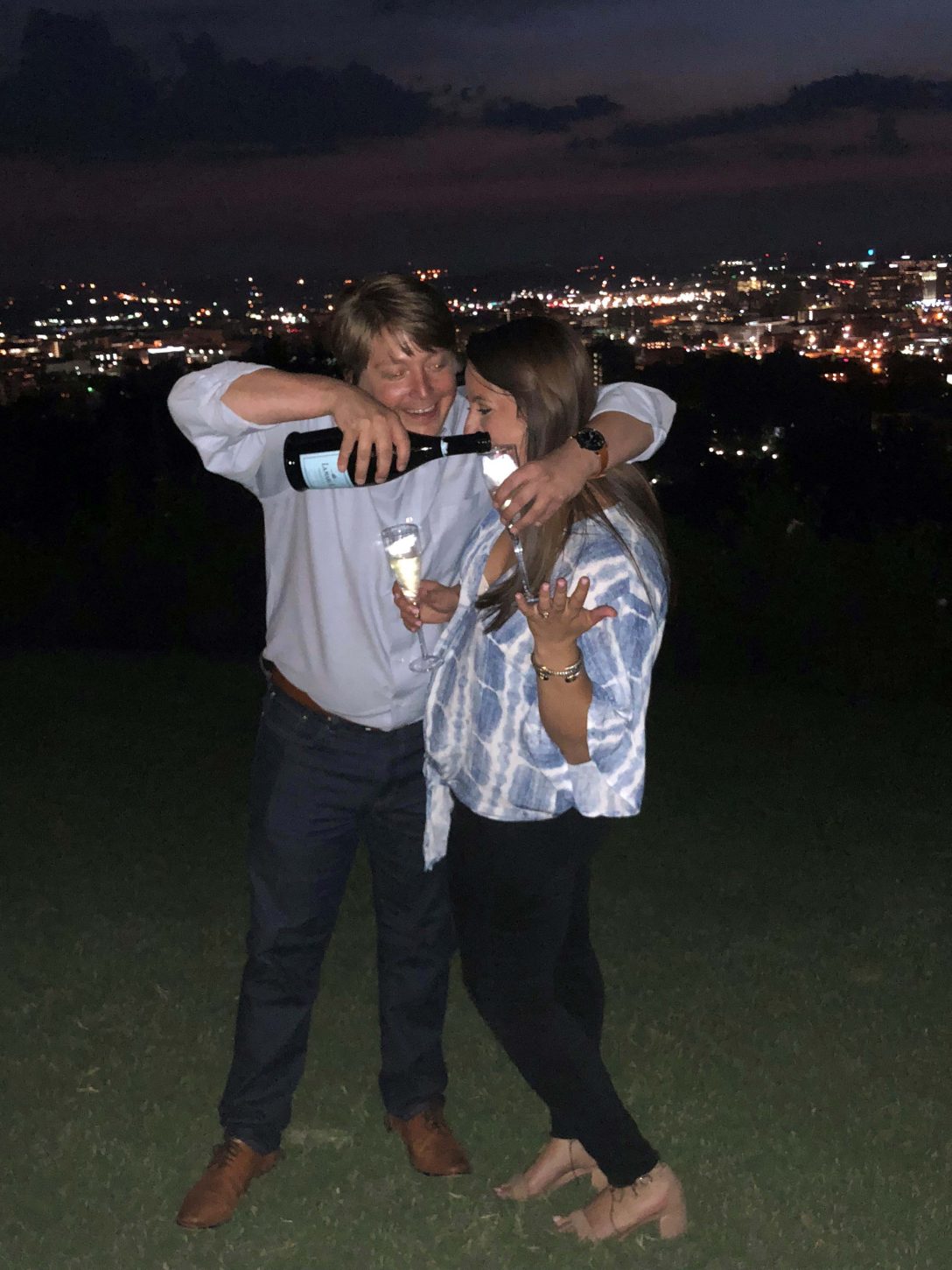 They say you’ll never forget your first kiss. For many, it lives on as a fond, yet-to-be-perfected token of schoolyard crushes and the journey into adolescence. Little did she know at the time, but Account Coordinator Hayley Winkler’s first peck would turn out to be the man she would marry.

On June 8, 2018, Winkler got engaged to her longtime boyfriend, Garrett Grisham. To know their story, we have to take a trip to the playground.

Winkler and Grisham first met at Greystone Elementary School. It wasn’t until fifth grade that they decided to become an “official” couple, and that’s also the year they shared their first kiss.

“We did date in fifth grade,” Winkler recalled. “But when we changed schools in sixth grade, Garrett dumped me to play the scene! The funny thing is, the girl he dated in sixth grade is now my best friend.”

Fast forward to university, and Winkler and Grisham once again found themselves in the same space. Both were in attendance at Winkler’s sister’s wedding, and the nostalgia and festive vibes sparked a renewed interest between them.

The two dated seriously for the next five and a half years. Then, the weekend of Winkler’s birthday, the two had planned a dinner date with another couple. Once dinner was over, the group suggested that they go to the Grand Bohemian Hotel to have a drink.

“I thought it was a little weird that we wouldn’t just get drinks on the roof of the Elyton since we were already there,” Winkler said. “But they all played it off so well. I had no clue what was coming.”

Before going to the Grand Bohemian, Grisham suggested that they go to one of his and Winkler’s favorite spots above English Village – a lookout ridge with a magnificent view of the city.

The friends arrived at the spot, took in the view, then began to leave. But as they were walking away, Grisham grabbed Winkler’s arm. As soon as he looked at her, she realized what was happening.

“I couldn’t believe it,” Winkler said. “I was holding his arms so tightly he could barely move. I had waited this long, and I wouldn’t even let him down on one knee!” 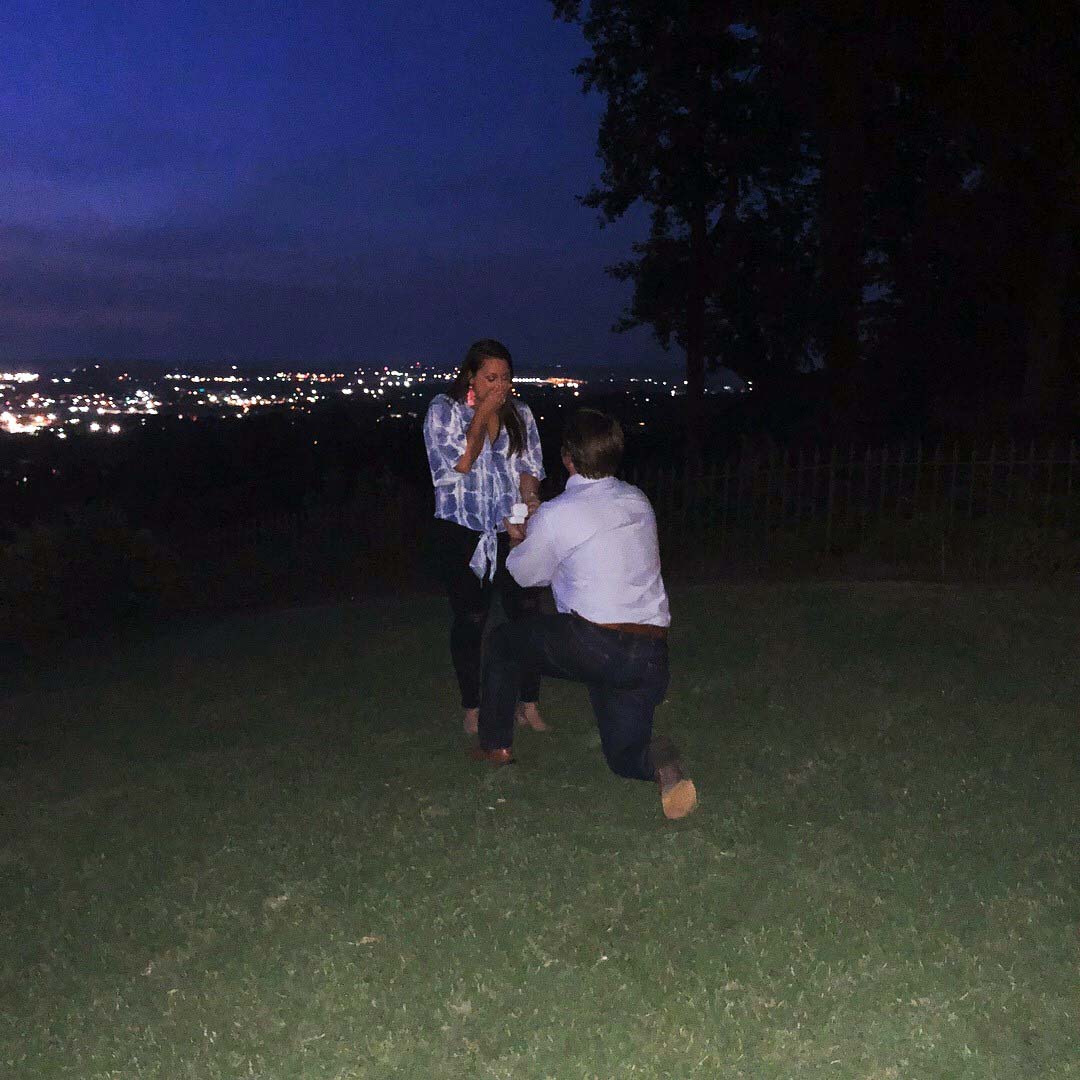 Grisham slipped free, knelt before her, and presented a ring and the most important question he had ever asked her: “Will you marry me?”

Ecstatic, Winkler embraced her new fiancé, along with their friends who had helped orchestrate the surprise. Once they made their way to the Grand Bohemian, Winkler recalled feeling a bit disappointed that her family couldn’t be there to celebrate. Many of her family and friends were out of town for the weekend. Or so it seemed.

When Winkler made it to the other side of the hotel roof, she was lost for words at the scene that beheld her. More than seventy of her family members and friends filled the private room that her parents had secretly rented. Many had done a masterful job at spoofing their whereabouts for the evening.

“More than anything, I wanted my family to share this moment with me,” Winkler said. “The fact that Garrett pulled all of this off and did it so perfectly was such an amazing surprise. I would live that night over and over if I could.”

The couple is set to wed April 27, 2019. Team Strong looks forward to celebrating and showing support for our newest bride-to-be!