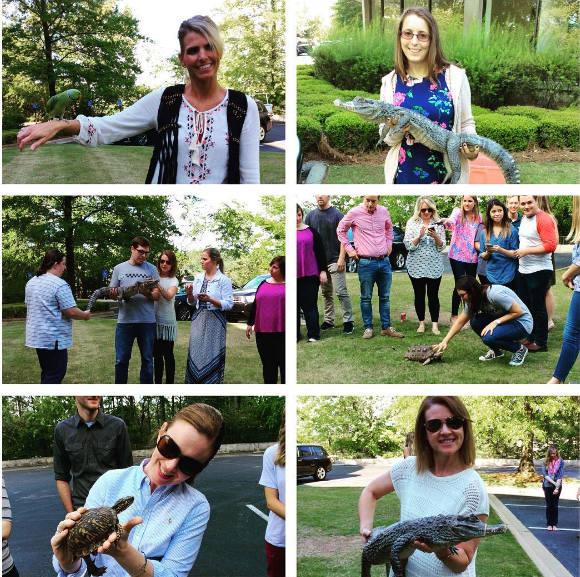 If you walked into Strong Automotive Merchandising during April, there’s no telling what you’d see. It could be a squad of yogis in the front lobby, or the sound of a barista shouting names off latte cups, or you might have to fend off a Caiman Lizard on your way up the steps. Some could argue this sounds par for the course at SAM, but for us at the agency, it’s the best thank-you we could’ve gotten.

April is Employee Appreciation Month at Strong Automotive Merchandising. For four weeks, the agency has something special to look forward to every day. This year, Owner John Paul Strong doubled the budget, meaning there were more prizes, events and crazy surprises than ever before.

“Honestly, I didn’t know what to expect,” Zuo said. “I had heard whispers of what they did in past years, but no specifics. I was expecting a caricature artist… but I forgot all about that once they announced the lineup for the month. It was more than I could ever imagine.”

Her most memorable event was – somewhat ironically – trivia.

“In all the trivia games, I learned that I really know nothing,” Zuo joked.

The souvenirs from the month’s festivities were nothing trivial. Employees received custom tees, free movie tickets, a company-themed umbrella and an extra vacation day.

Senior Graphic Designer Terry Wirt Jr. got cozy with a cobra when Ed’s Pet World came to visit. For the squeamish, this reptilian spectacle was better admired from afar. Even the bravehearted gave a start (or a sprint, if you’re Kiara) when an alligator-esque creature bounded toward the crowd. 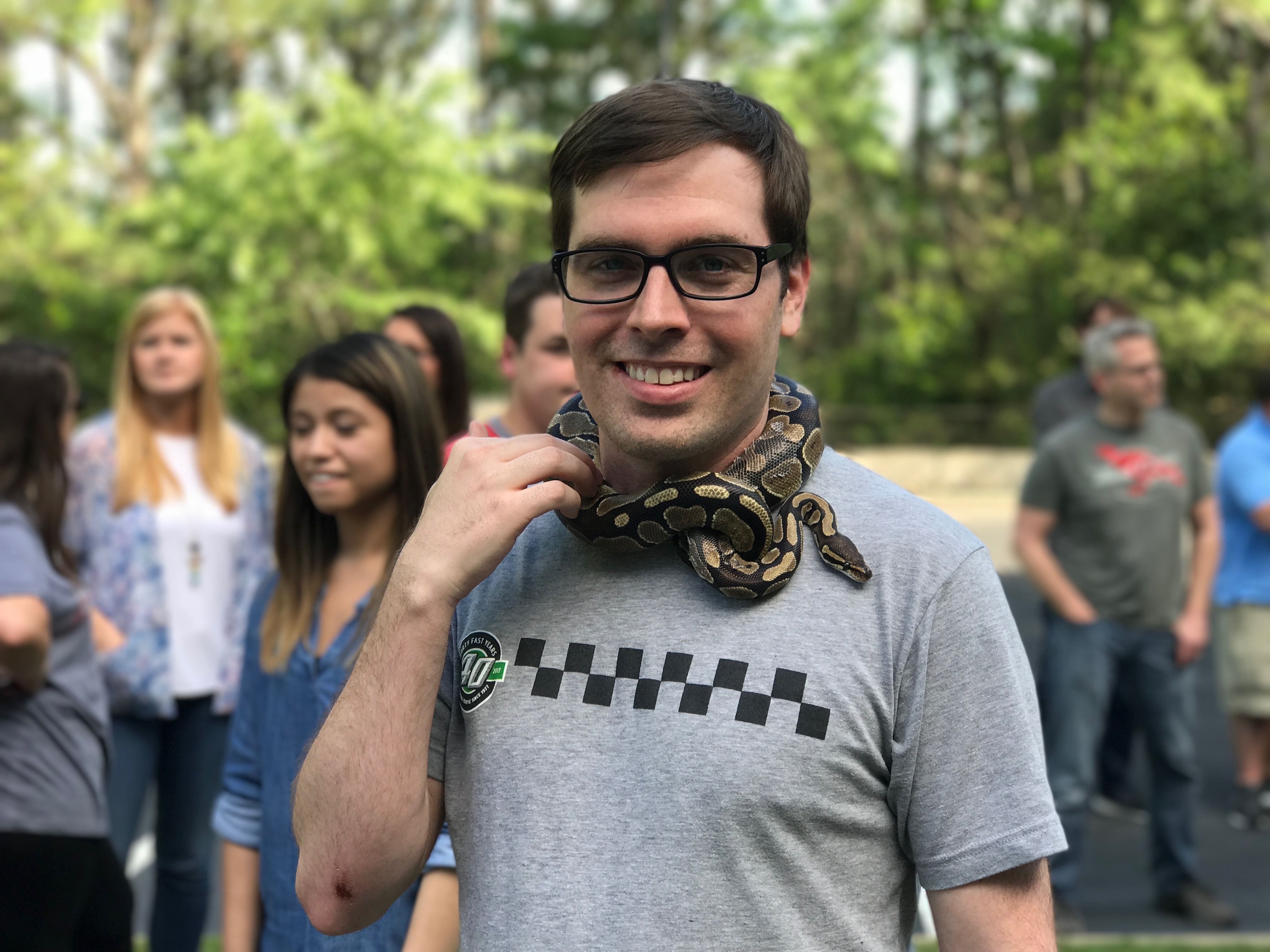 This May, Wirt celebrates his seventh year with the company. Yet, hearing that this year’s Employee Appreciation budget was doubled still left him gleefully astonished.

“Who would have thought a company would celebrate having you around – for an entire month!” Wirt exclaimed.

To finish off the celebration, the agency held a talent show, followed by a chance to dunk its favorite execs.

The talent acts ran the gamut from instrumental solos to contemporary dance. For Digital Assistant Shannon Boswell, it only took a bit of convincing before she was on board with the show.

“At first, I wasn’t totally sure, but after being asked a few times, I thought: well, God gave me the talent, so who am I not to use it and dance!” Boswell said.

Boswell did a contemporary dance piece to Near Light by Ólafur Arnalds. The 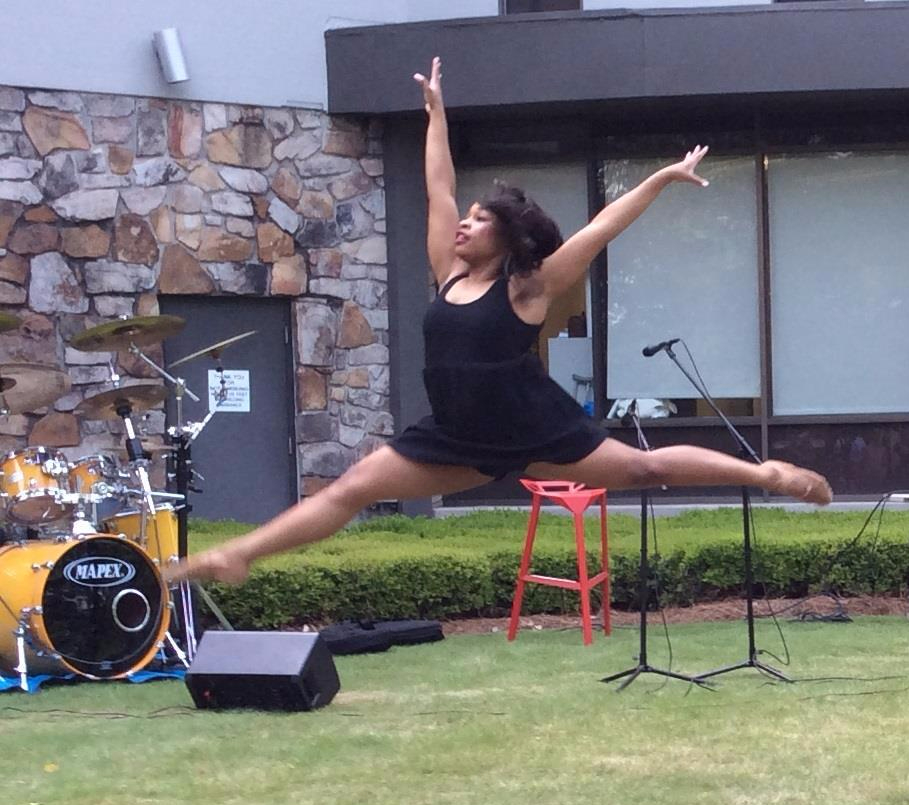 performance symbolized the impediments of fear and the freedom attained from no longer hiding in its shadow. She embodied this message in dealing with her own nerves before the show.

“I still get nervous before performances,” Boswell said. “There’s a big difference in dancing on a stage not being able to see your audience versus dancing in front of co-workers you see every day. But, once I got out there, all my nerves left. All I thought about then was delivering quality movement to the audience.”

Content Marketing Assistant Kiara Cooper knew the moment the show was announced that she had to play a part. Singing is her forte, but as for the song choice, she was lost for words.

“It didn’t come to me until I was getting ready for work one morning,” Cooper said. “I’m an av 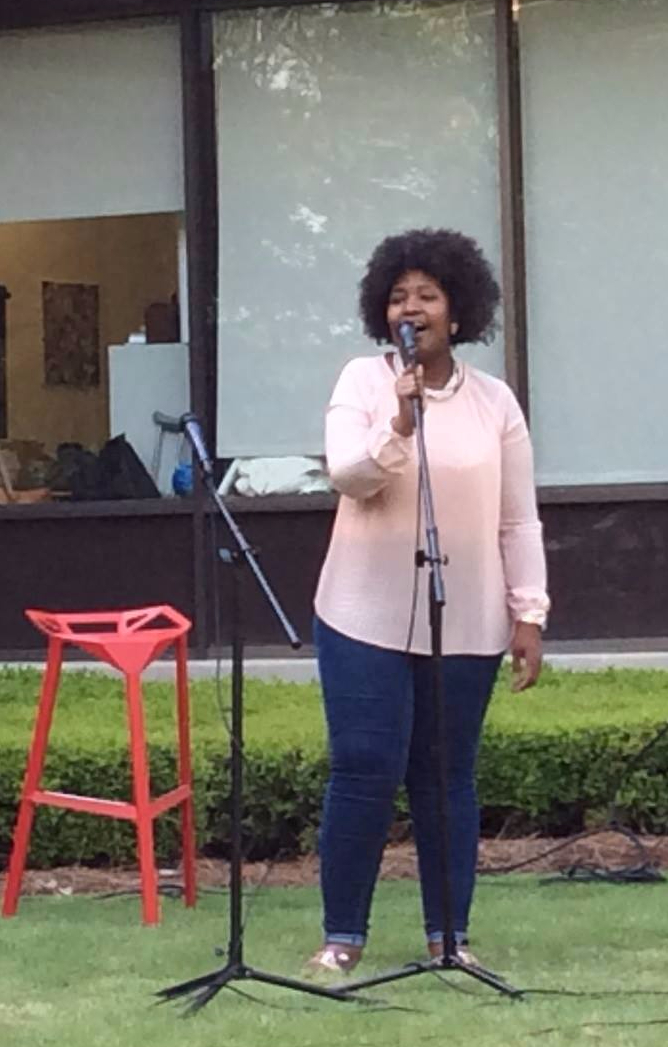 id shower singer, so I was performing my usual concert while debating which songs to sing. I let my faith guide me and sang some familiar tunes that came to mind in that moment. It resulted in a seamless mix of songs about God’s glory.”

Cooper gave a stunning acapella performance of worship songs by Mali Music and Todd Dulaney – a mix that she created herself. Like Boswell, Cooper aspired to send an uplifting message to her audience.

“I believe that we all have something that we’re good at,” Cooper said. “So, be intentional about figuring it out. Then, don’t be afraid to share it with the world.”

All in the span of a month, talent was shared, champions were crowned, and co-workers gathered together in the spirit of generous gratitude. Even once the creatures are caged and the dunking booth is drained, this April will be remembered as one of the most winsome here at Strong Automotive Merchandising.

This year, Cinco falls on a Friday, so you’ll have a full weekend to repent for all of that salt and lime – and enough time to delete those sombrero pictures you forgot you posted. But first, what are the people here at SAM doing to celebrate?

Social Media Coordinator Sara Jane Overby is headed to a weekend-long music festival, celebrating the holiday with good vibes and sunshine. In fact, her best Cinco fiascos often involve music. She recalls that a few years back, she spent an evening at Cantina in Birmingham with an authentic Latin music DJ.

“A friend and I went and learned how to dance to Latin music and drink real Mexican beer,” Overby said. “I also stole the sombrero off the front door and wore it all night. And I may or may not still have it hanging on my front door.”

For Account Coordinator Kelsey Stamps, the party will be at one of her favorite local Mexican joints – Mexico Lindo or Cocina Superior.

“I rank Mexican restaurants based on their salsa,” Stamps said. “Mexico Lindo ranks high on my list because of their salsa, even though all of their food tastes like black beans. We all make sacrifices in life.”

One of the most prized fruit bowl treasures at Strong – the elusive avocado – is especially popular on May 5. Americans consume roughly 81 million pounds of the guacamole-makers on this day alone.

While we in the US love an excuse to get together over deep-fried tortilla chips, the holiday receives relatively little fanfare in Mexico. It’s not even a federal holiday. Mexican Independence Day is September 16, but Cinco de Mayo is a celebration of the Mexican Army’s victory over France at Puebla in 1862. President Franklin D. Roosevelt’s 1933 “Good Neighbor Policy” popularized the holiday in its aim to improve relations with Latin American countries.

“We were visiting Quintana Roo, which is a Mexican state south of Cancun, the week of Cinco de Mayo,” Leopard said. “We expected to have a full-out party – margaritas and everything – but no one said a word about it. My husband told like five people ‘Happy Cinco de Mayo!’ and got nothing but a blank stare.”

It’s clear that Cinco de Mayo is an American tradition. But what’s really wrong with swapping our baseball and apple pies for a day of maracas and tacos? Whether you’re planning a full-out fiesta or hitting the drive-thru at T-Bell, let us know below, and may this Cinco be your most bueno.

At our agency, April showers bring wedding flowers! This spring, love is abloom at Strong Automotive Merchandising. From March till May, the bells couldn’t stop ringing. We were overjoyed to help these ladies celebrate, and wish them a blissfully Podio-free honeymoon.

Direct Contact Account Executive Grace Hatcher was the first of the trio to tie the knot. Her wedding took place Saturday, March 25 at Canterbury United Methodist Church in Mountain Brook, Ala. The reception that followed was held at the Birmingham Museum of Art. From catching the scent of English Roses in the entrance, to finishing the celebration with a glow-stick dance party, no detail was left unattended.

“When Grace walked down the aisle, I had to stifle a gasp,” said Direct Contact Account Executive Beth Nichols. “The reception had the same effect. She had thought of everything.”

Nichols went on to reveal that her favorite dish was none other than the wedding cake itself – a seasonal iteration flavored with fresh strawberries. The uniqueness of the cake was mirrored by that of the dinner dishes – a mix of traditional Southern and Cajun fare.

Media Coordinator Katie Reeves’ wedding followed soon after. On April 8 at the Sonnet House in Leeds, Ala., Reeves said ‘I do.’ The ceremony took place outside, just as the sun was setting. The mixture of sunlight and shadows playing off the cobblestone fireplace perfectly illuminated the halcyon scene.

“It was picturesque,” said Media Assistant Holly Brazeal. “She had the perfect night for an outdoor wedding.”

For Brazeal, one of the most memorable parts was the music (apart from the bacon swiss dip, that is).

“Their DJ was so great!” Brazeal said. “He started with special songs for Katie and Jeremy, but by the end of it, he had everyone on the dance floor.”

Account Coordinator Courtney Binder’s wedding was the most recent of the three, taking place on April 23. The ceremony was intimate, being shared with close family members. The newlyweds celebrated their honeymoon by taking a cruise and escaping into lush, tropical paradises.

Binder was the star of SAM’s spring-themed wedding shower. She arrived to a scene of gerbera daisies, mason jars and goldenrod table sets. The affair was complete with locally-grown cuisine by Urban Cookhouse.

“I am so blessed to work with such an amazing group of people,” Binder said in response to the shower. “Everything was perfect.”

As these ladies emerge from their sun-soaked getaways, we at SAM wish them a warm return and many happy days ahead.