There’s a misconception surrounding education. In today’s workforce, we’ve drawn a line between learning and working. Once you’re handed a diploma, it’s time to enter the real world and get to work – or so we’re told. In truth, the formal education we receive in college does little to prepare us for a lifelong career. With information traveling faster than ever, it’s all the more important to stay current with the latest techniques, advances, and trends in your field.

The big difference between college learning and career learning is this: one you’re forced to do, and the other you must elect to do. But both are equally as vital.

Dennis Johnson has been in the automotive advertising industry for decades. Even more, he’s been with SAM founder Mike Strong since the beginning. It goes without saying that he has become a master at staying on top of, and sometimes ahead of, the industry’s trends.

“Business lives and dies by the adage ‘Lead, follow, or get out of the way,’ and it is especially true in automotive merchandising,” Johnson said. “The ‘latest and greatest’ has always been the shiniest stone. With access to so much information today, if you walk into a meeting and are not abreast of what’s going on, you cannot command respect.”

Can you imagine if a technology or fashion firm continued producing the same product without ever updating or setting new trends? It would be defunct in a matter of years. The same is true in advertising. Even in your own niche, it is important to understand that the world is always evolving, so you must too.

When it comes to staying current in your field, Johnson maintains that it is more of a mindset than a method. He councils that it requires both an open mind and eyes wide open.

Over the years, even the methods by which Johnson has stayed up-to-date have evolved.

“Our standard for commercial greatness years ago was limited to network television, and that was three networks,” Johnson said. “We would tape primetime shows and sporting events focusing on the commercials – the graphics, the music tracks, word count – and apply those in our production.”

He continued with an anecdote on Mike Strong’s always-keen mindset.

“In the late 80s, Mike Strong returned from a Colorado skiing trip with a half-dozen jackets all designed with neon colors. He said, ‘These colors are the future, everybody’s wearing them, put them in our color palette today.’ Everything we are exposed to in our world, when processed through a filter of how can I use this and do so more effectively, is the foundation for expanding skill sets.”

While much of staying current in your craft requires the right mindset, Johnson did have a few practical tips to share.

Along with Johnson’s time-tested tips, there are a multitude of methods like subscribing to online industry newsletters and following industry-specific LinkedIn groups. Whatever method you choose, the most important – as Johnson has demonstrated – is to never grow complacent. 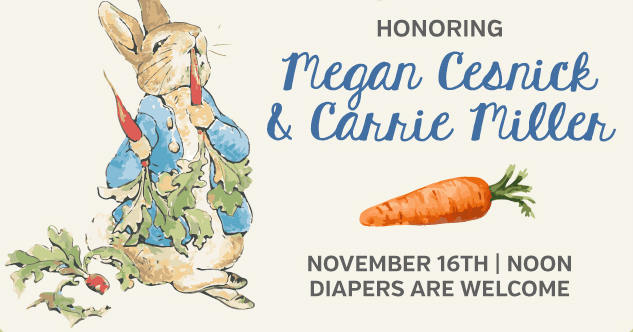 On Thursday, Nov. 16, the Strong family will come together to celebrate our two expectant mothers, Carrie Miller and Megan Cesnick.

Enjoy a behind-the-scenes look at the shower planning, and learn more about these moms-to-be before the celebration.

Down the Rabbit Hole

If you hadn’t guessed from the invitation, the theme of Strong’s upcoming baby shower is Peter Rabit. Given that both Cesnick and Miller are expecting boys, the shower committee saw it as the perfect theme. But that answer wasn’t always so clear.

“We originally planned for a hot air balloon theme,” said Meredith Anderson, one of the shower committee members. “We had already started concepting, picking out décor, and had even gotten the first invitation proof back from Emily. Then, Grace saw an Instagram post over the weekend of Cesnick’s friends and family shower. The theme? Hot air balloons.”

So, the team returned to the drawing board. Anderson, along with Grace Hatcher, Beth Nichols, and Lisa Hall, switched gears and decided on a Beatrix Potter Peter Rabbit theme.

“With two moms to celebrate, we hoped to make this one of the most creative showers yet,” Nichols said. “We’ve got surprises in store that we think will make this day really special.”

At the event, guests will enjoy treats like vintage décor and edible table arrangements.

But the pièce de résistance of this shower will be the specially-curated food. The fare was selected based on the cravings of the expectant mothers. Plus, this cuisine has never before been offered at Strong.

If you’d like to bring a gift, diapers are welcome. Tip: Babies won’t stay newborn size for long. Buying sizes 1–3 will make your gift go farther!

The first baby scheduled to arrive is Henry Dugan Cesnick on Dec. 26.

“Dugan is my husband’s middle name and was his grandfather’s name,” Cesnick said. “But I love the name Henry, so here we are. And for the record, no – he won’t be called Hank. It’s just Henry!”

Cesnick’s friends and family threw her a lovely shower in September, themed to – spoiler alert – hot air balloons. At the shower, she got to indulge guilt-free in her love for Big Spoon ice cream sandwiches. After all, it doesn’t count if it’s a craving!

Arriving right on the heels of baby Cesnick is Jackson Daniel Miller. The official due date for Carrie Miller is Jan. 13, but her doctor predicts that may move up to New Year’s Day.

As far as cravings go, Miller said she has experienced a pretty mild pregnancy.

“I wasn’t able to smell or eat bananas for the longest, which is crazy because I love bananas,” Miller said.

While we will miss these future moms when they’re away, we at Strong are thrilled to help celebrate these precious new additions. 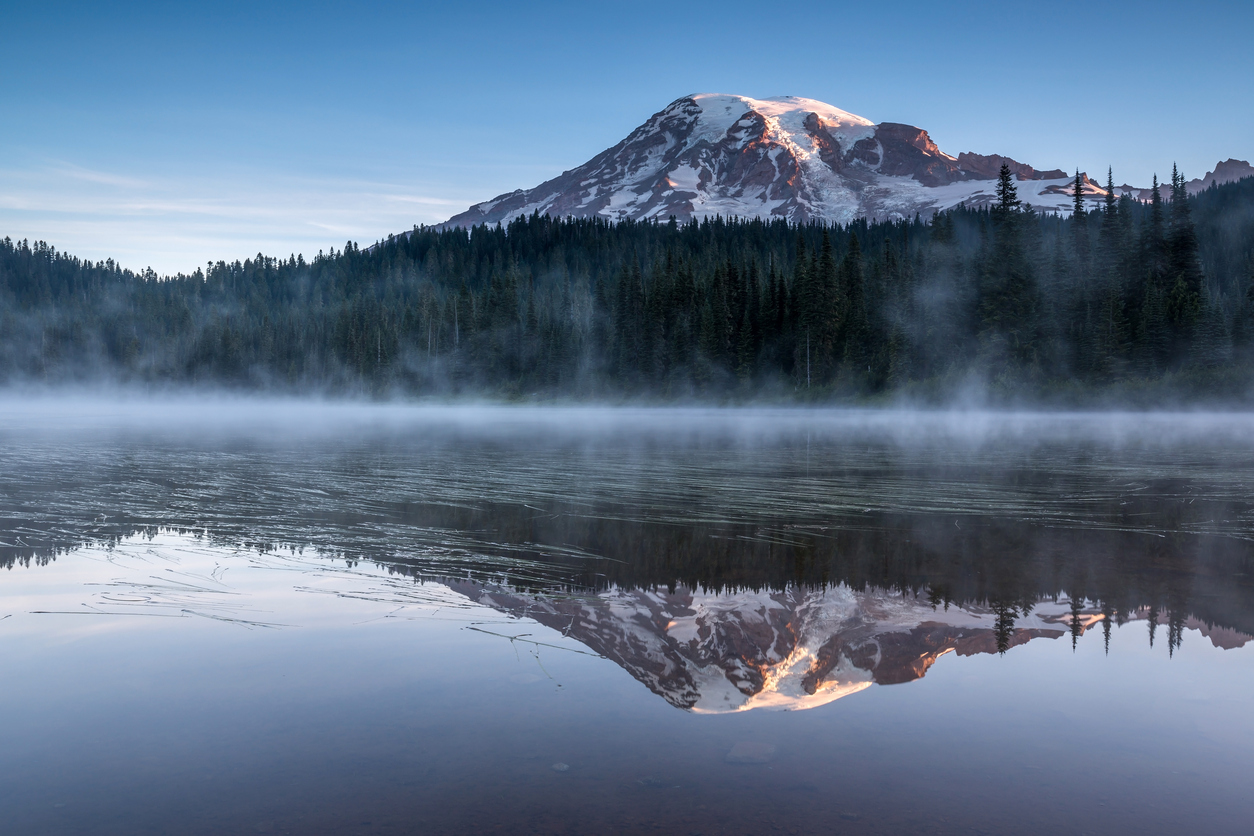 Growing up in Washington, Evan Peterson marveled at the soaring, snowy caps of Mount Rainier. To him, it represented both a landmark and a challenge. But it wasn’t until moving to Birmingham that he found his thoughts returning to the West Coast, and ultimately to the mountain.

Years after it disappeared from his everyday sight, Peterson made the decision to climb Mt. Rainier. In preparing for the climb, he’s accomplished feats and grown in ways that he never would have imagined. Peterson’s story is an inspiring tale of setting a goal and seeing where it leads. And it’s only just begun.

It’s a Marathon, Not a Sprint

After making the decision to climb one of the most dangerous volcanoes in the world, Peterson knew the first step was to start training. This was no stroll in the park, after all.

While Alabama’s mountains provide splendid views of the city and are home to expansive state parks, they’re no match for Mt. Rainier. Reaching the summit requires incredible amounts of strength, stamina, and endurance. So to train, Peterson started running.

“After a while, I was doing 7-mile runs 3 or 4 days a week,” Peterson said. “I realized I was already halfway through marathon training.”

As a step toward his mountainous goal, Peterson registered for the Rock ‘N’ Roll Marathon in Savannah, Georgia. On Saturday, Nov. 4, he covered 26.22 miles during his first ever marathon.

“I never thought I’d like running,” Peterson said. “When I played baseball for UAB, running was always a punishment. Now, it’s something I look forward to, and I’ve gotten lots of benefits from it.”

Running for three hours at a time is a huge commitment. It helps that one of Peterson’s former teammates signed up for the marathon with him. The two realized that running doesn’t have to be painful; instead, it’s a way to hang out.

“We were surprised when we realized that, after the first couple of miles, our breathing and heart rates evened out, and we could hold normal conversation,” Peterson said. “Being there to encourage each other is really important on long runs when the joint pain borders on unbearable. Knowing we’re going through the same things helps me push through. They say shared pain is half the pain, after all.”

It Takes an Iron Will

Training for the Rock ‘N’ Roll Marathon has opened another door along the way.

While training, Peterson began talking to several friends who had completed the Ironman Triathalon, one of the world’s longest endurance races. 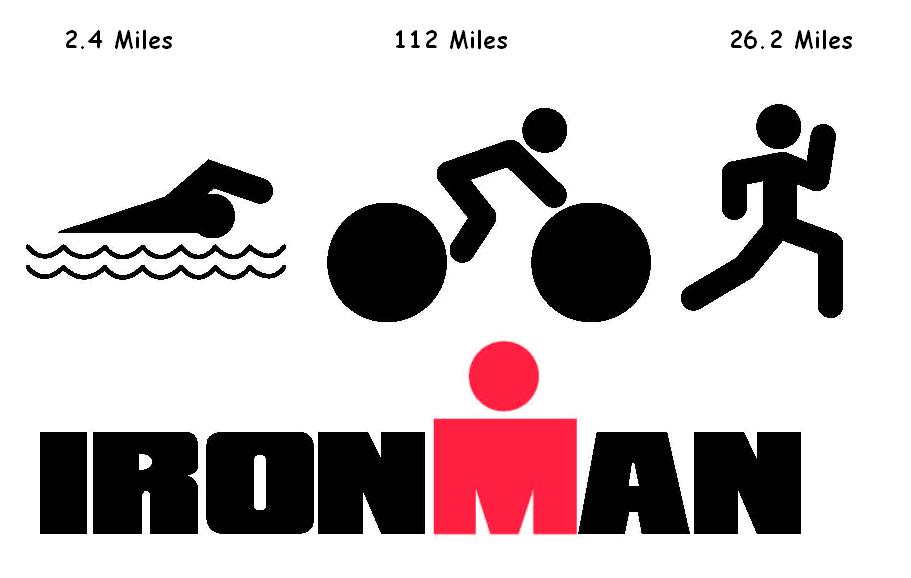 “Running a full marathon is one-third of the Ironman, so I figured why not sign up for the full thing?” Peterson said.

And so began the next phase of his journey. Peterson will compete in the Ironman Canada on July 29, 2018.

Having an extensive athletic background, Peterson has always enjoyed a physical pursuit. But he hopes to gain more than just material benefits from completing the Ironman.

“I expect this triathlon to be a spiritual experience in a way,” Peterson said. “It’s not like other races or competitions. It’s just you out there. There’s nothing to keep you going but your own heartbeat and pure willpower. Once I complete this, other challenges in life won’t seem so big.”

In fact, one of Peterson’s most compelling reasons for committing to a marathon, triathlon, and volcano climb stems from the desire for adventure.

“Adventure is a funny concept,” Peterson said. “Many people have this romantic view of what it means to be ‘adventurous.’ They create Pinterest boards and dream about living in Italy, but never actually go through with it. That’s why I’m doing this. To see what adventure is out there. Just to live.”

A Start is a Start

For someone wanting to start running, biking, or working toward any new goal, Peterson’s number one piece of advice is to simply start.

“It’s so easy to make excuses,” Peterson said. “You can wait till you’ve got the perfect pair of shoes, a new bike, or hours of free time. But the excuses will always be there. If you want to start running, go outside and run. It’s as simple as that.”

Another important piece of advice Peterson gives is to look at a goal like this as a lifestyle change.

“You can’t do just one piece of the puzzle and expect it all to work,” Peterson said. “When I first started training, I was still going out several nights a week and eating however I wanted. I quickly realized that something had to give. Getting healthy, or working toward any major goal, requires you to change your lifestyle, not just one behavior.”

The Goal is Just the Beginning

Peterson’s story illustrates a valuable lesson in the power of goal-setting. While the goal itself is the first step, it’s often simply the catalyst for much greater growth and change. The skills, self-confidence, and wisdom you gain while working toward a goal are benefits that last much longer than the day you cross the finish line. In fact, achieving your goal would feel pretty empty without all of the hard work and grit that built up to it.

So focus on the goal, but know that the true reward is in the journey.