Each year, Mike Shaw Toyota (MST) in Corpus Christi, Texas, honors veterans and military personnel. The dealership’s favorite way of saying thank you is by providing Thanksgiving dinner for those who have served. Turkeys for Troops is a signature event and a key part of the partnership between MST and SAM.

Like many other events in the past 12 months, things looked a little different for the 2021 Turkeys for Troops. Paid Social Coordinator Brad Price and Social Media Assistant Celina Leggiere traveled to Corpus Christi to represent SAM and manage social media promotion for the event. Both have been working on MST’s social strategy and have built a relationship with the client.

“This is the 5th year MST has done Turkeys for Troops,” Brad said. “They passed out gift cards instead of actual turkeys this year. People could use it to get a smaller turkey and pair it with a ham if they wanted, or pick up other Thanksgiving sides and supplies.”

For both Brad and Celina, this was their first time traveling for SAM.

“I was very excited,” Celina said. “I’ve been handling MST’s reviews and comments on social platforms, so I had already forged a relationship with Cory. It was nice to actually meet him and the rest of his team.”

During the event, the two set up a system for enhancing MST’s social media reach. Brad was inside the dealership publishing content and interacting with fans online, while Celina was on the ground capturing photos and videos.

The team focused most heavily on video and live content. The most successful post highlighted a car given away to a military widow.

“It was really impactful to see her be taken care of,” Brad said of the giveaway.” Her husband died serving in Iraq in 2015.”

In addition to video strategies, the team used countdowns and boosted promotional posts in the days leading up to the event. Brad and Celina also made sure to collaborate with the event’s sponsors by tagging the companies to increase social reach.

“My favorite part was getting to spend so much time with the client, and the experience of seeing how a dealership operates on the back end,” Celina said.

“There was constantly something going on the day of,” Brad recounted. “That’s how I like to live my life, constantly busy like that.”

More than just a learning experience, Celina and Brad’s work at MST improved the client’s ability to drive traffic. Facebook page views for MST increased 225% the week of the event. And the dealership’s website saw an 8% overall increase in traffic.

Great job to Celina, Brad, and all who helped make MST’s Turkeys for Troops successful in its fifth iteration. 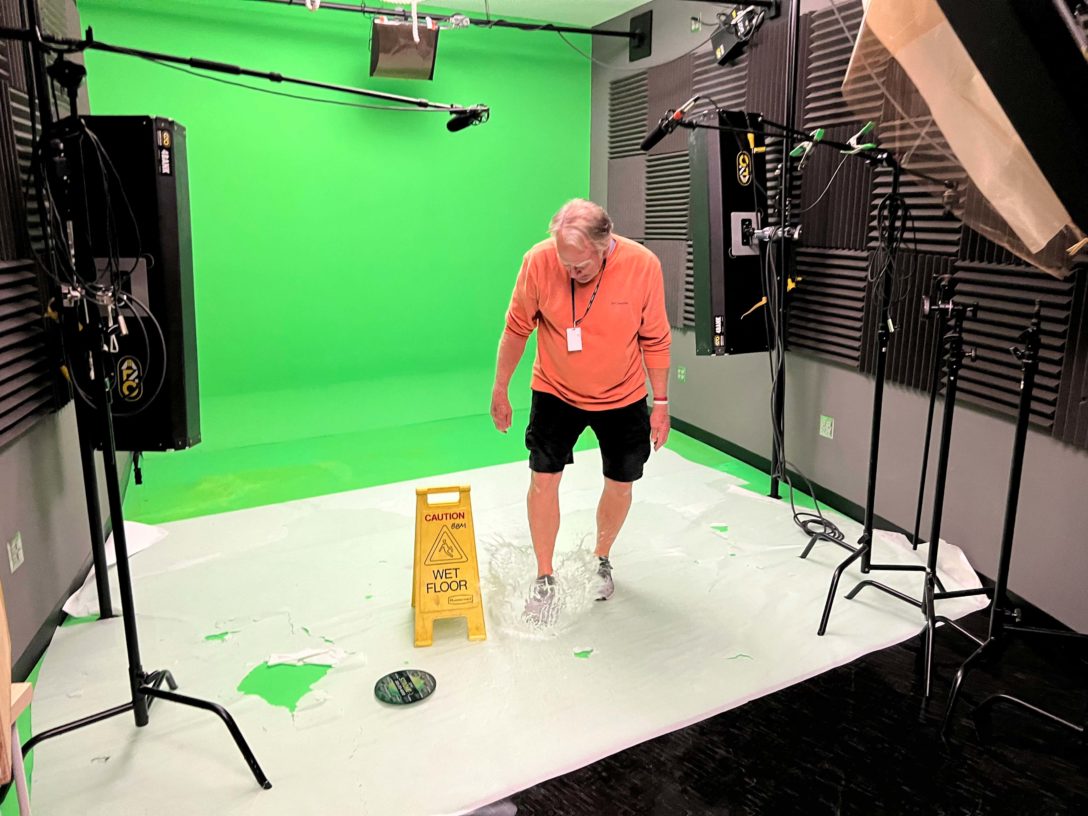 One day before Halloween, Digital Marketing Coordinator Karli Burns was working in the office. It was a Saturday, so there weren’t many people around. She ventured downstairs to buy a Pop-Tart, and that’s when she realized that Midtown Studio was underwater.

David and Dennis were among the first to witness the true damage of the flood. Not only was much of the building’s lower floor soaked, but the two also discovered that the floor tilts toward the studio. That was where most of the mysteriously leaking water was concentrated.

Determined to find the source of the leak, Dennis ventured into the first-floor women’s restroom to find a commode spewing water. It wasn’t clear what caused the leak, but the water was unrelenting.

Rushing to the studio, David and Dennis began trying to salvage equipment. Luckily, the computers and cameras were high enough off the floor and came out undamaged. Power cords, control boxes, and the carpet were another story.

With the building’s plumber en route, it would still be several hours before the leak could be stopped. In the meantime, David and Dennis thought about the silver lining behind this unexpected Saturday.

“We realized the studio is probably due for an update anyway, and now is the perfect time,” David said. “The flooding gave us a chance to rethink how we want it set up, and how we can build it back better.”

An Opportunity for Modernization

Since the power boxes for the studio lights were damaged by the water, Production will have the chance to replace them with more modern technology. When the studio was built, fluorescent lighting was the highest-tech option. Now, the lights will be LED, giving the team the ability to change hues and colors during shoots.

There will also be a riser added to where the cyclorama (cyc) wall is, helping elevate this backdrop to prevent warping from humidity on the ground-level floor. The cyc wall will be replaced with a newer version as well.

Of course, new carpet is required, as well as new baseboards and a fresh paint job for the studio. Overall, the studio’s configuration will remain the same. But the upgrades mentioned above, along with new additions like a pneumatic camera pedestal (like the rolling camera stands at TV stations) and cable management devices will help modernize the studio and its capabilities. Luckily, insurance funds are able to cover the cost of these upgrades.

Construction is set to begin this week. Be on the lookout for the grand reveal of Midtown Studio 2.0!