Some say that good handwriting is a lost art. A skill once taught consistently in schools, penmanship is more the hobbyist’s foray these days.

The digital world’s preference for perfectly-produced typeface doesn’t always bleed over to our human minds, however. For many, handwriting still holds an elegant, personal appeal.

It’s this predilection for penmanship that has allowed Account Manager Elisabeth Broome to run a successful lettering business in her spare time.

From Doodles to Paychecks

As a child, Elisabeth held a fascination for lettering. Over and over, she would trace the characters of her name, trying different fonts and apertures. As she moved through to high school, Elisabeth’s handwriting came in handy creating cheerleading signs for school football games.

“Back then, most of my writing consisted of simple block letters,” Elisabeth said. “Now looking back, I can tell I’ve grown a lot since my beginner days.”

After moving to Birmingham, Elisabeth attended a one-day calligraphy workshop at Samford University. This was her first taste of formal training in calligraphy, and it opened her eyes to a world of possibilities.

She didn’t receive her first paid gig until a co-worker asked her to produce a set of Christmas invitations. After posting her work on Instagram, the requests started rolling in. 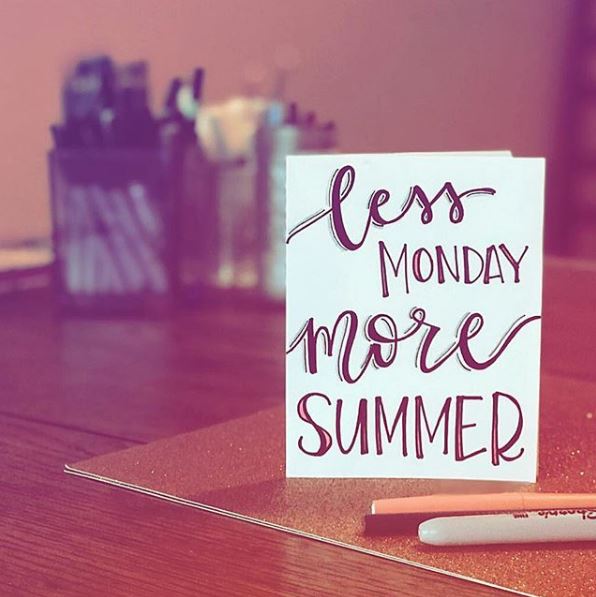 “Social media marketing has been my main avenue for attracting business,” Elisabeth said. “I’ve gotten 10 projects off of one post before.”

Elisabeth began with invitations. Then, as she received requests for lettering on other mediums, she would research and practice until she had it mastered. When she completed her first chalkboard order, she discovered it was her favorite form of lettering. Now, chalkboards are Elisabeth’s specialty.

A Stroke By Any Other Name

The term “calligraphy” encompasses a panoply of ornate lettering styles. Traditional styles, such as Copperplate and Spencerian calligraphy, require special tools, exact strokes, and pots of ink. Modern calligraphy differs in that it preserves visual appeal and harmony while allowing a degree of freedom that isn’t present in the traditional scripts.

“I like to call my lettering ‘faux-calligraphy’ since it isn’t any one specific style,” Elisabeth said. “I’ve taken examples of letters from different styles and combined them to form my own script. I can definitely pick my writing out of a crowd.”

“I’ve seen some gorgeous examples of chalkboard lettering at Trader Joe’s and Taco Mama,” Elisabeth said. “Most people think I’m taking forever to look over the menu, but really I’m looking at how they lettered the board!”

In the future, Elisabeth hopes to grow her handwriting hobby and increase her digital footprint. She already has a dedicated Instagram account. Her goal is to create an Etsy shop so she can expand her services beyond the current scope of social accounts and word of mouth.