2,300 years ago, Aristotle defined the three pillars of persuasion – ethos, logos, and pathos. Now, two millennia later, these principles remain indispensable to a successful marketing strategy. Ethos, which represents credibility, is especially important for dealerships looking to gain market share and retain their customer base.

Manly Honda in Santa Rosa, California, holds one of the most credible titles a store could wish for. This dealership was the first in history to sell a Honda vehicle in the United States. Today, you can still see the retired model displayed on the showroom floor.

Even greater than the historical claims Manly Honda can make are its modern-day accolades. Since becoming a SAM client, the dealership has secured the number one spot in its district for two months in a row – a first for the store.

It’s easy to assume that a top-level spot requires an enormous amount of ad spend. The catch, however, is that Manly Honda’s budget is shockingly smaller than that of most SAM clients. In February, the dealership had a Facebook ads budget of just $2,100 and was one of the agency’s top-performing accounts in terms of sales and traffic.

One of the dealership’s secrets to success is its highly targeted approach. The goal was to penetrate the local Hispanic market, as it represents a significant opportunity for expansion. In January, SAM launched the store’s first Spanish-language ads. Shortly thereafter, a customer came in and referenced the ad’s offer. This was the first time a member of the Hispanic community had referenced any marketing from the dealership, and our client was overwhelmingly pleased.

Manly Honda also has a secret weapon up its sleeve – Adolfo Salazar. In Santa Rosa, Adolfo is somewhat of a local celebrity. At the dealership, he works as the Hispanic Marketing Manager. Originally, the company’s outreach to this market consisted of Adolfo posting organically to his own network of contacts. After SAM launched paid Facebook ads for the dealership, results only amplified. 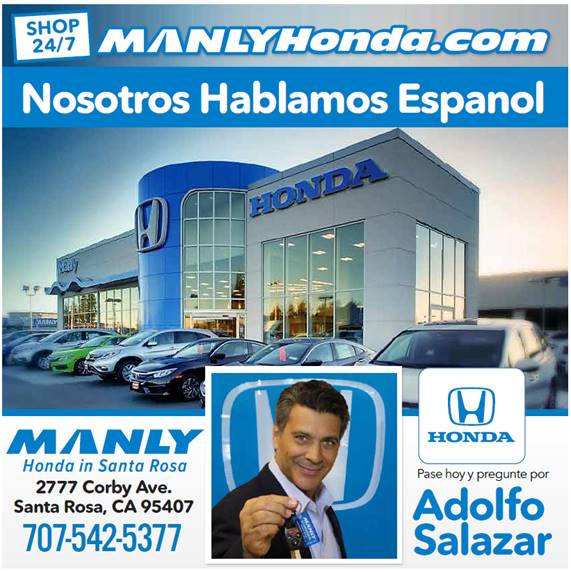 Manly Honda is different from many SAM clients in that it prefers to invest in SEO more than PPC. The store runs double the amount for its SEO budget, believing that is where Manly Honda will see its greatest return. Mail is also a high performer for this dealership, with one recent mailer generating 21 calls in its first day. Previous mail campaigns have scored more than 30 sales matches.

To reach the level of success that Manly Honda has been able to achieve, it takes a mix of smart strategies and refined internal processes. This dealership has both, and with SAM’s help, plans to continue achieving many more number one feats.